Abstract: Ingemar Ståhl was a productive and imaginative economist who was professor of economics at Lund University 1971–2005. His intellectual curiosity gave him a wealth of ideas that he applied to a wide range of issues, for example defense, social insurance, education, housing, labor markets, health, taxation, environment, finance, industrial policies and the political economy of the Swedish model. He became an academic pioneer who imported new theoretical developments, such as public choice and property rights, from abroad and applied them to Sweden. In addition to being a researcher, he was also a keen participant in public debate and, at various times, a member of governmental and private policy commissions and a reformer of undergraduate teaching in economics in Lund. He exerted a profound influence on Swedish economic debate, arguing for market-oriented reforms and for more competition and freedom of choice in the public sector. His many contributions – published as well as unpublished – are listed in this bibliography.
Download full version of the paper

Abstract: The global financial crisis that erupted in 2008 has triggered a lively debate regarding macroeconomic policies and financial regulations. This volume contains 15 contributions presented at a conference on ”Macroeconomic policy in crisis” held at the Department of Economics at Lund University in October 2014. Most of them deal with the challenges facing the framing of fiscal and monetary policies after the global financial crisis, with a focus on the Swedish record. The conference was held to honor Professor Lars Jonung on the occasion of his 70th birthday. He has been active in macroeconomic policy debate in Sweden since the 1970s. He has served as researcher and professor at Lund University and at the Stockholm School of Economics as well as policy advisor in various capacities. He was chief economic advisor to Prime Minster Carl Bildt 1992-94, research advisor at DG ECFIN, the European Commission in Brussels 2000-10 and chairman of the Fiscal Policy Council of Sweden 2012-13. The volume ends with an account of his lessons learned from economic policy-making. The contributions are in English, Norwegian and Swedish.

Abstract: Sweden is presently experiencing a steady rise in the volume of credit in households and in house prices. This expansion has continued almost uninterrupted for two decades. The boom in credit and asset prices has created a new interest in the role of household debt and of credit in the Swedish economy. Here we construct an empirical measure of the Swedish credit cycle, which is, as far as we know, the first of its kind. The credit cycle, according to our measure, turns out to be longer than the traditional business cycle as well as displaying larger volatility. We find that the Swedish credit cycle closely follows the international credit cycle. We present estimates of the decline of the debt ratio necessary to reach “normal” debt levels and discuss how the adjustment process may evolve. We see clear dangers with the existing financial imbalances created by the credit boom in the Swedish economy. Monetary, fiscal and other economic policy measures to arrest the credit boom have to be carefully designed such that they do not contribute to the crash they are intended to prevent.

No 2015:1 Thirty years on The road to a more stable Sweden. Where do we stand now?

Abstract: This essay evaluates the analysis and recommendations of the 1985 report by the SNS Economic Policy Group thirty years after its publication. The SNS report, entitled The road to a more stable Sweden, recommended the adoption of a rules-based monetary and fiscal policy combined with deregulation of the financial system, the housing sector and the labor market. The report had a considerable impact on Swedish debate on economic policy and eventually on Swedish economic policies. During the past three decades, a rules-based framework for both monetary and fiscal policy has been put in place. Many supply-side reforms have been implemented. In hindsight, the SNS report stands out as successful. However, the SNS group in 1985 underestimated the macro-economic challenges created by financial deregulation. In short, financial instability as reflected in rapidly rising asset prices has increased substantially during the past two decades, creating a need for a revision of the rules-based message of 1985. In addition, the arguments for deregulation of the housing and the labor market of the 1985 report still stand strong.

No 2013:1 From gold standard to price level targeting: Swedish monetary policy in the daily press during the 1930s

Abstract: In September 1931, Sweden was forced to abandon the gold standard and decided to stabilize the domestic price level instead of upholding a fixed exchange rate. It was the first (and only) time a country adopted such a policy of price-level targeting. Sweden is thereby regarded as having anticipated much of the inflation target policy pursued by a number of countries – among them Sweden – from the 1990s and onwards. This paper presents reports and reasoning within six leading daily newspapers in connection with and following Sweden’s transition from a gold exchange standard to a paper standard. Through these newspapers, one can get an understanding of how monetary matters were treated in news reports and editorials as well as of the positions of politicians and economists. The credit for Sweden’s pioneering role is usually ascribed to Swedish economists working in the spirit of Knut Wicksell, primarily Gustav Cassel and Eli Heckscher. These two, along with Bertil Ohlin, dominated the 1930s Swedish debate on price policy. In following this debate chronologically in detail, we can get an understanding of how the experiment developed and found its features, where different actors were positioned and how they moved, and what information the general public – in this sensitive childhood of democracy – had access to. 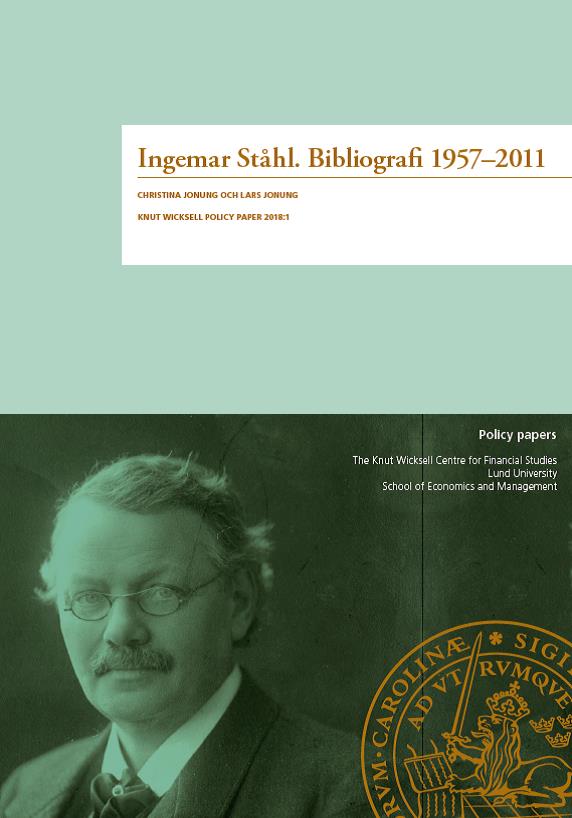