Despite the rising backlash against migrants and minorities, highly skilled minorities can contribute to the economic activities and development of their local communities. But, can the economic legacy of highly skilled groups persist long after they are uprooted from their homelands? To answer this question, Arbatli and Gokmen (2022) study long-term sub-national development in Turkey after the mass expulsions of the Armenian and Greek communities of the Ottoman Empire in the early 20th century. Since these events led to an almost complete and permanent removal of both communities from Turkey within a short time, they provide a unique quasi-natural experiment to study the economic legacy of highly skilled groups after they are gone.

The study documents that there is a sizable Armenian and Greek legacy effect in Turkey on contemporary measures of economic development. This persistent influence is grounded on the significant contribution of Armenian and Greek communities to human capital accumulation among Muslims. Inter-group transfers of skills and knowledge were instrumental in this process, leading to greater human capital among Muslims in minority regions both in the past and today.

History abounds with episodes of forced migration triggered by civil unrest, wars, natural disasters, and state mandated expulsions or relocations. If current times are any indication, we will continue to witness similar events going forward.

In a new paper, Arbatli and Gokmen (2022) examine the economic footprints of the two largest non-Muslim communities in the Ottoman Empire, i.e. Armenians and Greeks, almost a century after their wholesale removal from their homelands within modern Turkey. This research studies whether the positive legacy effects of these high-skilled groups are sufficiently strong –against the backdrop of the potentially adverse impact of the expulsions themselves– to impart a lasting imprint on the subsequent spatial patterns of economic development of the locations they departed.

Armenian and Greek communities of Anatolia historically possessed higher levels of human capital and wealth relative to Muslim groups (Üngör & Polatel, 2011; Der Matossian, 2007; Kévorkian, 2011). Particularly over the 18th and 19th centuries, when trade between the Middle East and Western Europe was soaring, the economic standing of the non-Muslim minorities of the Empire significantly improved vis-a-vis the Muslim communities as the former came to dominate trade and commerce (Kuran, 2004). Two events at the turn of the 20th century marked the end of centuries-long religious coexistence. Ottoman Armenians were subjected to mass killings and deportations (also known as the Armenian Genocide) during the First World War, while the Greeks were forced out of Asia Minor following the Greco-Turkish War of 1919–1922 and the subsequent population exchange between Greece and Turkey in 1923. These tragic episodes provide us with two unique experiments of history that are well suited to empirically assess the long-run legacy of productive minorities on regional development, in general, and on local human capital, in particular.

The study documents that districts with greater Armenian and Greek concentration before the expulsions are today (i) more densely populated, (ii) more urbanized, and (iii) exhibit greater economic activity measured by light density at night. For example, Figure 1 displays the positive correlation between former shares of Armenian and Greek minorities in districts and modern average luminosity. 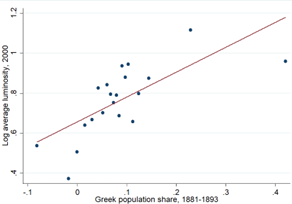 In this study it is argued that an important source of minority legacy was inter-group human capital spillovers during the long co-existence of Muslim and non-Muslim communities. In support of this mechanism, the study first provides historical evidence that Ottoman Armenians and Greeks were on average more educated than their Muslim counterparts and constituted a disproportionately high share of the skilled labor force. Moreover, already before the expulsions, Muslims in high minority regions were relatively more educated than other Muslim groups. For instance, Figure 2 shows that Muslims in high minority areas had greater middle-school enrollment rates. 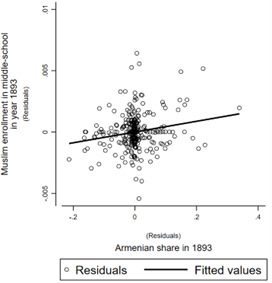 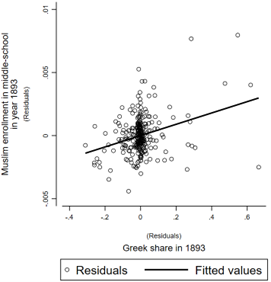 Figure 2: Minority shares and Muslim Enrollment Rate in Middle-School in 1893

The evidence from this study demonstrates that today there are still significant gaps in educational attainment between high and low-minority districts. Baseline estimates suggest that a 20 percent increase in either historical Armenian or Greek share implies 2.1 percentage points higher current high school completion rates. However, this effect of historical minority presence diminishes significantly once more direct proxies for exposure to minority human capital –such as the proximity to minority school buildings or historical literacy rates among the Muslim population– are accounted for. The results also show that proximity to old minority school buildings predicts higher luminosity even conditional on other types of community buildings.

Finally, consistently with the human capital spillover channel, this study documents continuity in occupational patterns. Using novel historical micro data on religious identity and occupation for the entire universe of male residents in three Anatolian cities around 1840s, the results show that Armenians and Greeks were indeed over-represented in relatively more skill-intensive occupation groups, and that religious diversity within some of these occupation groups was particularly high –suggesting ample scope for inter-group economic interactions and knowledge and skill transfer. Then, drawing on the 2000 Census micro data, the results confirm that many of the same occupation groups where minorities tended to specialize constitute a higher share of the labor force today in ex-minority regions. 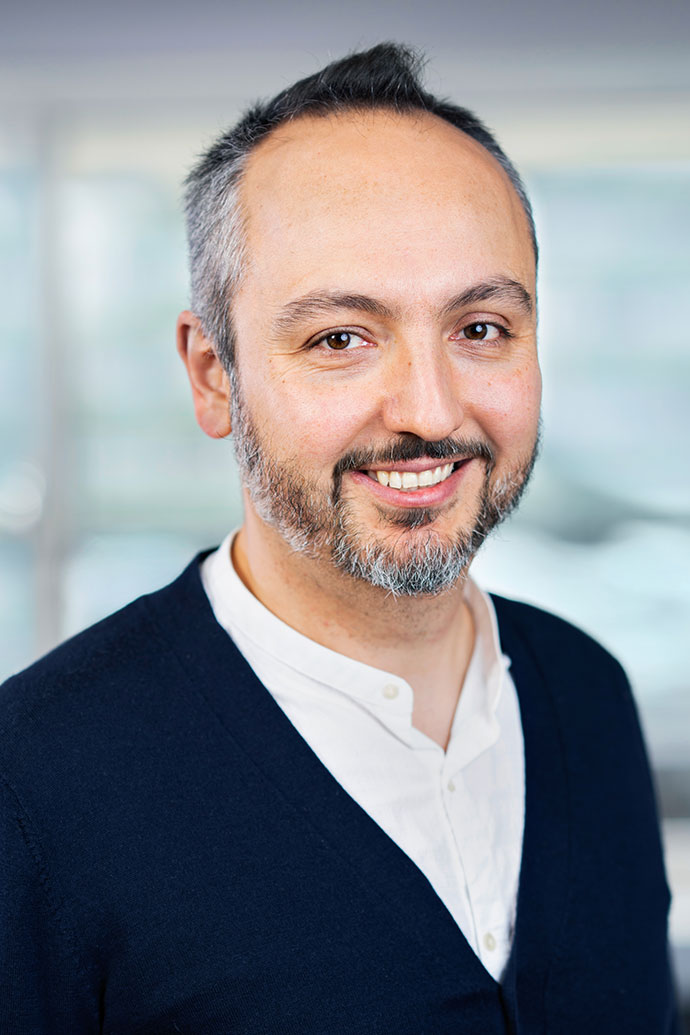