After three years in the The Swedish Fiscal Policy Council to which she was hand-picked as a tax expert Åsa Hansson, Associate professor in Economics, summarizes her experiences. It is no understatement to say that the work within the council has been different due to Corona. Meet Åsa and hear her story in this colleague check! 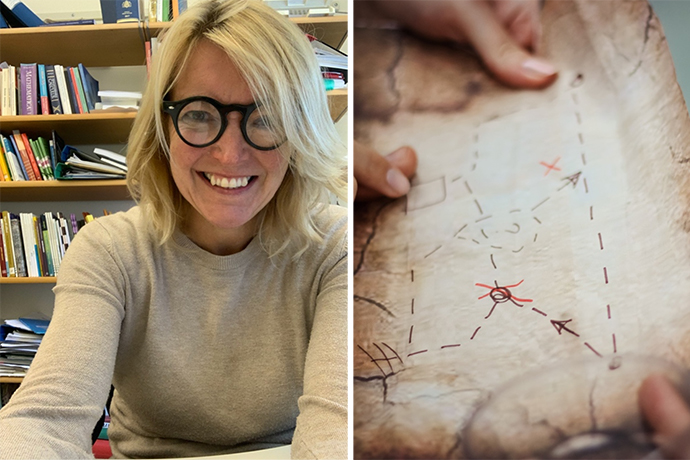 "Public economy is reality-based", says Åsa. "That's why it's so much fun to talk about and to teach."

From the beginning, was it public economy and taxes you wanted to do?

"No, in fact I wasn't interested in that at all", says Åsa. "I wanted to go into development economics and I went to Bangladesh to write my bachelor thesis but when returning there it was only one full-time course given here so I had to take it, and that was in something as uninteresting as public economics. I thought it sounded so boring but I had to take the course and it turned out being super interesting! After a while I realized that this was about economic policy, really, and very relevant and interesting."

I thought it sounded so boring but I had to take the course and it turned out being super interesting!

And what about taxes? How did you get into that?

"I still wanted to conduct research in development economics and dreamt about working in Africa, but then I got a scholarship and ended up at UC Santa Barbara where no development economics was offered. Then I had to choose another subject, and it seemed natural to choose the one that they were really good at, theory of taxation. Eventually I wrote my thesis there and was supervised by an American tax professor, in Santa Barbara. Back in Sweden and LUSEM I realized that I was pretty alone in my field of research and that my dissertation was quite different from the Swedish mainstream research in taxation. When I defended my thesis there were quite some excitement about some results from my thesis and my thesis even ended up in the headlines. I was very surprised."

Evaluate the Minister for Finance during a pandemic

Three years ago Åsa was asked if she wanted to become a member of The Swedish Fiscal Policy Council. Members in the council sit for three years and the remit of the council is to provide an independent evaluation of the government's fiscal policies. Åsa was experienced, to say the least, when she became part of the council. For many years she had worked with tax investigations and economic policy. The council fulfils its tasks primarily through the publication of the report "Swedish Fiscal Policy" which is to be presented to the government each year. When Åsa and the other members were ready and about to start the presentation process in March 2019 Corona struck.

…the economy was in free-fall and nobody really knew what was going on and even less what to do.

"We were just about to finish our evaluation last spring when Corona was a fact and the economy was in free-fall and nobody really knew what was going on and even less what to do. We all became handcuffed and it was a very tough situation for everybody, not least the Minister of Finance, and it was hard to evaluate the fiscal policies as the uncertainty was enormous. As a researcher in Economics it was a thrill but at the same time I was of course very worried," Åsa remembers.

The council's work immediately became very intense but when the autumn came and the prognoses looked pretty good and we thought that the emergency situation was over the next pandemic wave came:

"This spring has therefore also been pretty intense as well. It has been a lot of work but very interesting and I have learned so much", says Åsa.

"In spite of the special situation the work has gone really well", Åsa says. "The members are very skilled as well as the permanent staff and the cooperation in the council went very smoothly. We were all aiming for the same goal, and the interest of Sweden. I also got involved, apart from the evaluation of the fiscal policies, in writing two reports, one on the housing market and one on a tax reform."

Is the council's work limited to Sweden only?

"Our mission is of course Swedish but there is always one foreign expert in the council who can add another perspective and we have contact and meetings with international colleagues. One observation is that Sweden is one of the best in the class when it comes to sound public finances and we have such a well-designed framework for the public finances that is enforced and followed. We are appointed to make sure this framework is followed."

Yes-sayer that loves her job

After her term of office in the Fiscal Policy Council Åsa will continue with her teaching and research at LUSEM and LTH. What is on the agenda now?

"I'm involved in different projects, for example a comprehensive tax project for SNS (Studieförbundet Näringsliv och Samhälle/Center for Business and Policy Studies). The last three years they have invited researchers to write about the Swedish tax system. Now I'm responsible of compiling the material and come up with a comprehensive tax reform proposal. That is very exciting."

"Yes, I'm very interested in international taxation and now I'm looking deeper into global and digital taxation, a lot is happening within that field internationally and it's really exciting. In this project I collaborate with Cécile Brokelind at the Department of Business Law."

She has kept on teaching all along and will continue with that this upcoming autumn. Her practical experience which becomes a part of her teaching is appreciated:

"The students appreciate when models and theories are connected to real economic problems and policies. My field and interests make teaching quite easy and rewarding as it is easy to connect to practical experiences, that is shown in course evaluations", says Åsa.

She works part time at LUSEM and part time at the neighboring faculty, LTH. At LTH she works at the Real Estate Science, a unit within the Department of Technology and Society, where Åsa for several years was Head of unit.

How Åsa can possibly find time for all this and why she becomes involved in so many things, projects and assignments she explains with "being a Yes-sayer" and it is easy to believe that she doesn't mind when she at the end of the interview suddenly says with a smile:

"I have the best job in the world!"

Thank you so much Åsa for this "colleague check"!

Åsa Hansson presenting "Svensk Finanspolitik 2021" at the conference of Finanspolitiska rådet 24 May 2021: